Boy did we get into trouble for this light hearted article!

The Conference with a Sicilian twist of lemon! by a slightly twisted Caro Childs and other attendees

March the 7th 2008 was a date fixed in the whole family's diary and not just my family, the 'Face Conference' as it is known is the big gathering of all the UK members of the "Face Painting Family" if you know what I mean. It is the place where allegiances are fixed, where sudden, let's call them demotions, happen, where there is a fair amount of back stabbing and where you can meet the people on the way up and sidestep those on the way down. If you don't know who your friends are (and which of us does?) it is vital to observe who is talking to whom. Don't get me wrong, being ignored is probably safer than being made much of, Judas was not the only person to kiss his victim first and the Face Family are fantastic kissers. I don't kiss when I am on a job, kissing is for France. However on arriving I could not avoid the hugs enthusiastically accompanied by a quick frisk. Meaningless precautions as the clever theme of the Wild West created a great cover story for the huge number of guns most of the "guests" had brought with them. Appropriately there were even visitors from the American Continent looking slightly defensive, the theme was right up their street, and it was no surprise that old fashioned colonial attitudes prevailed.


THE FACEPAINT UK STAND - COMPLETE WITH POWER POINT AND LANTERNS! 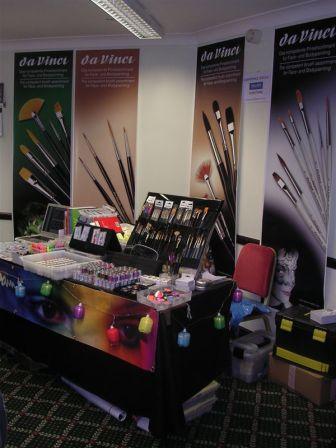 There was the usual jockeying for position in the ‘Trading Post’ and some fast dirty work switching the tables by yours truly, giving us the advantage of an actual power point for the FPUK Power Point display, so carefully prepared. Everyone who is anyone was there setting out their stalls and displaying their hardware, but who knows what was ‘under the table’. Sometimes a brazen display avoids any unpleasantness later on; at least everyone then knows what you are selling. Of course when you sell everything like we do you have to be a bit discreet so as not to draw too much attention from the old timers like Fox or Bills. In the end it is all about Respect. With a name like daVinci behind us we could always ask for 'protection'.

We have it on good authority that ‘prescription’ drugs were widely on offer to those in need, some even masking their addiction behind sniffly noses. (To dispel any doubt - this is a joke - no illegal drug taking would ever be part of such a staid gathering - but thank goodness alcohol is not outlawed YET! A tip for the uninitiated, the best outlaw company can always be relied upon outside in the smoking quarters.)

Having made our pitch secure we were bound for a last minute Committee Meeting and the AGM, otherwise known as the Aggravated Granny Mafia. This is where months of behind the scenes loyalty to the inner sanctum of the Casa and plotting to result in those in favour to get control of the Family. I was accused of being the biggest Mama in the history of the Family, but I have been on several diets since I was Chair, so have a reformed form.

Rooms were now available so we all checked in to our nice lodgings for the duration, got completely fed up with delicious dinner and there followed an evening of fun and frolics, with some blessedly light hearted mini-competitions. It became increasingly apparent that this conference was superbly organised, and there was nothing to whinge about at all! Tammy Beeks had sponsored all the prizes for these little comps, and fine prizes they were too, her generosity knows no bounds. Some folk took them very seriously, but for the most part it was a big giggle and some very interesting, funny and even rude designs came forth. Well, we were nearly all grown ups (few can afford to bring their children). We might have had a few drinks and lost the plot a little, but the results of the octopus challenge (was it 5 minutes?) are testament to the fishy flavour of the evening. 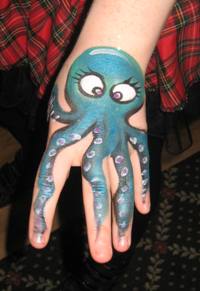 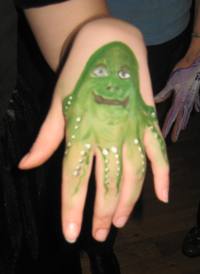 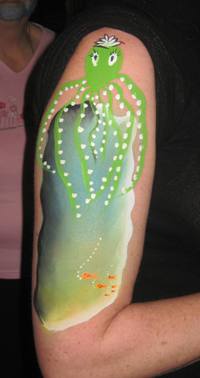 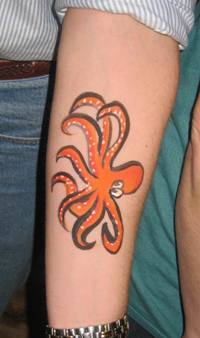 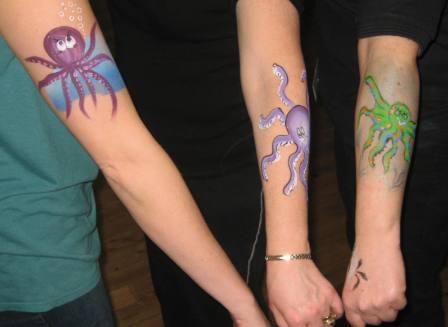 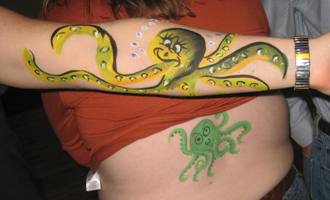 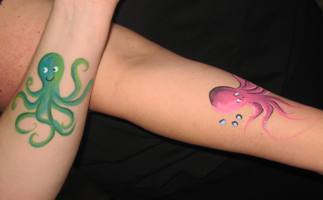 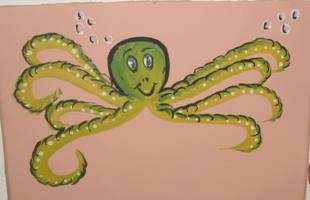 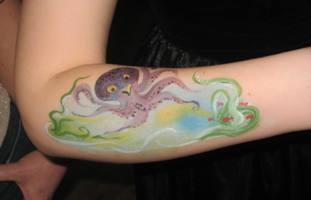 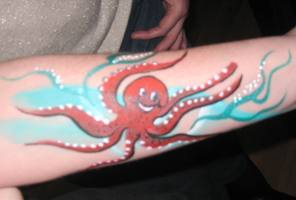 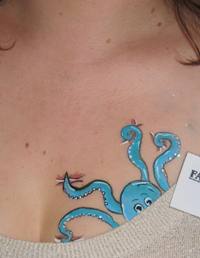 Bibi and Caro’s designs for a quick tattoo comp... 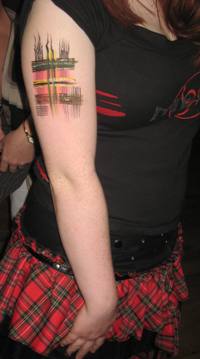 and we got creative with leaves before everybody left to get a good night’s sleep! 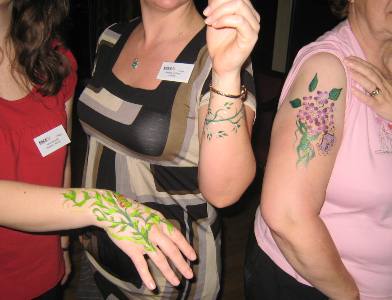 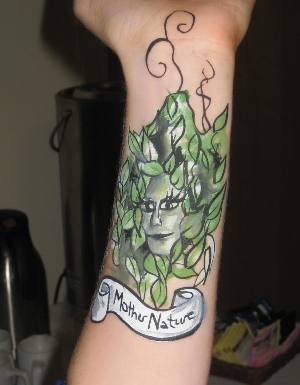 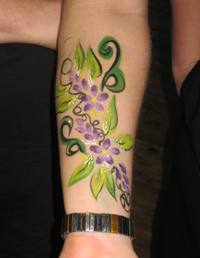 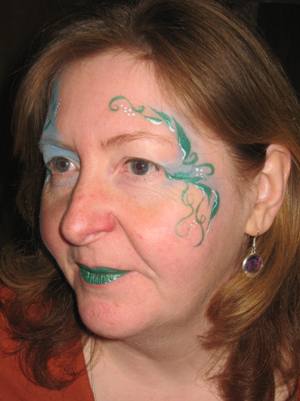 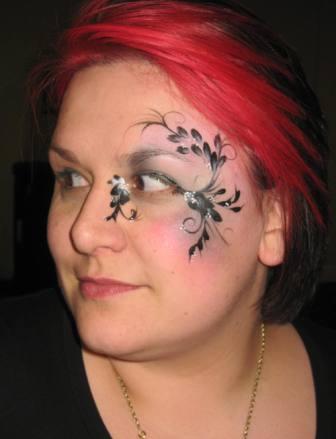 Michelle Withey with a very pretty leaf design
that would portent very good news the next day.

And Bibi and Caro's parting shot! 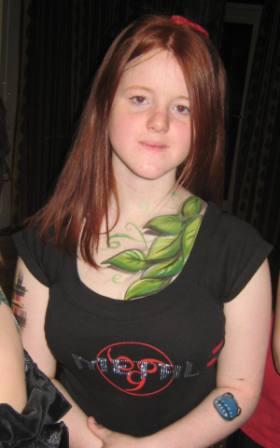 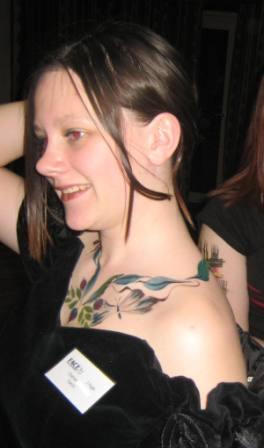 The programme for Saturday was fairly jam packed, but not as stressful as the commercial Convention experience. FACE is a much more relaxed affair with the demonstrators coming from the membership, but let’s not forget that there is a wealth of home-grown and international talent amongst it. The Facepaint UK team were pretty well occupied dispensing goods and good advice from their stand, but we had a secret spy at her first conference, and we felt sure that she would take a keen interest in the goings on.

Lorna Strachan did a demo called ‘Setting the Scene’ but it wasn’t the murder mystery we thought it might be, (obviously she’s not in the inner circle) in fact it was a very quick and pretty expanded eye design, a formula that would be useful in any situation. 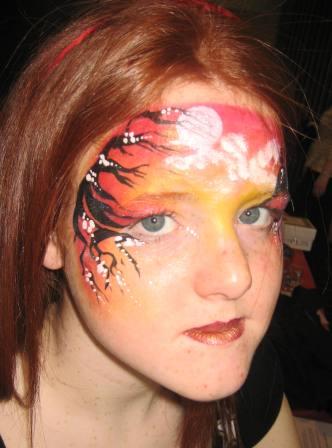 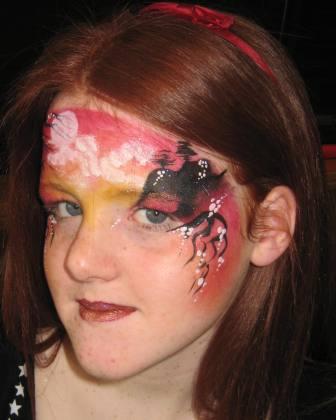 This was followed up with an ‘eye design’ demo from Glyn Goodwin that we don’t have a photo of yet, sorry.

The voting for the postal competitions was getting underway, it is so difficult to choose just one from all the talent on show, and in contrast to the endless proscribed voting for each entrant of Face Painter of the Year (FPOTY) you get just one vote for one design in each category. A middle way would be a good thing, and I’m sure that everyone would have been relieved to choose their top 2 or 3.

Coverage of the competitions is in the next two articles, we’ve run out of photo space here!

Bibi had a demonstration of a ‘Western Princess’ lined up for the afternoon and despite having done plenty of research, realised that she hadn’t actually decided what a Western Princess might look like! It had been this proposed demo that has prompted her to do the designs for the postal entries, but as voting for the anonymous entries wasn’t over; she couldn’t repeat one of these. She taunted the gathering crowd with the announcement that she was going to paint a train, surely there was one that steamed up the west coast in times gone by called ‘The Western Princess’?

However the intended humour drained away as she realised there was an intimidating row of what looked remarkably like large Sicilian widows, swathed in black garb worthy of the Cosa Nostra. They were not amused. Having reserved the front row, they wanted their money’s worth, at least that's how it felt! Luckily you spend a lot of time with your back to the mob as you paint, dangerous, but comforting at the same time. The idea took shape during the demo, with Bibi talking informatively through how a design is created, how to incorporate different elements, placement and colour choices. Her choice of a couple of cobs of traditional Indian sweetcorn as the main element was a surprise, but it just goes to show that anything can be considered. 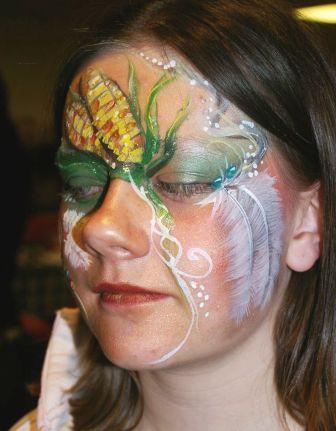 For more conference gossip read on .....