We saw, we came and we conquered. An invitation for 50 painters to adorn the adorers could not be ignored, and must surely be the biggest team ever. The dust is settling, the washing machine has finally finished washing, England won against USA (a bit of a foregone conclusion in truth) and nobody got hurt. Here are some photos, and an article written by a team member, one of our favourite personalities, Gary Yam. 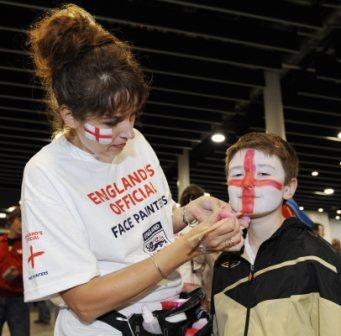 This was a big job by anyone’s standards; and a big occasion with a big venue - England International Friendly against the United States at the new Wembley stadium. For the first time, the Football Association, custodians of English Football, was providing mass face painting for the fans. Normally, some might call legions of supporters, faces emblazoned with the Cross of St. George a childish and jingoistic excess. But since we’re paid face painters, this would be better described as a positive and healthy celebration of football as well as some honest family fun!

The cohort of face painters were to congregate outside the staff entrance of the majestic new stadium in preparation for a potential clientele of some 70,000. Those that were unacquainted with the other painters hovered around until the group reached critical mass and the glitter encrusted black trousers became too obvious to miss. The chattering group was soon joined by its spiritual leader, the Boudicea of face painting, Bibi Freeman, bearing much equipment.

Our FA liaison handed out passes and the fifty strong work party made its way through security and snakelike through the bowels of Wembley to our rendezvous point. Wembley safety rules prohibited the use of tables or fixed positions, so the face painting was in the form of small teams to hover at each of the twelve dozen gates. In preparation, Bibi had prepared a bumbag full of equipment for everyone, packed with sponges, paint, stencils, brushes and some football shaped chocolates. Those at the gates serving the away (United States) supporters’ end had their kits embellished with some blue paint and star-spangled stencils. Finally, some very smart FA T-shirts proclaiming us to be “England’s Official Face Painters” were issued. Armed and ready, the teams were distributed around the concourse. 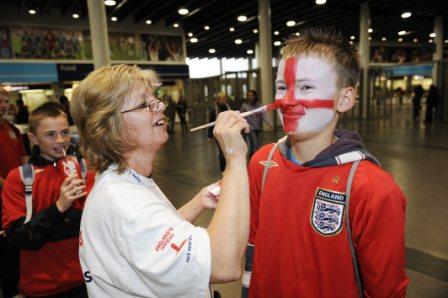 The gates opened at 18.00, and as the fans meandered in, they were duly waylaid by the bumbagged hit-teams. As ever, children were the main takers, but a fair number of older supporters had the red and white sponged and brushed on. The main problem seemed to be getting across the message that the FA had paid for the face painting and that the service was, in fact free.

PAT SHOWS OFF HER FACEPAINT UK BRUSH SLEEVE IN ACTION! 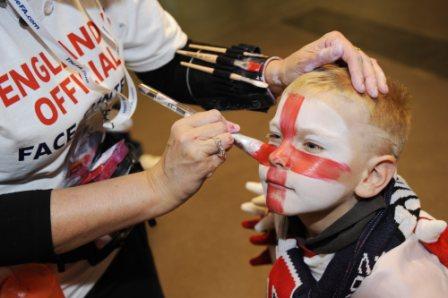 A quick reaction force of waterboys, headed up by Bibi’s progeny worked tirelessly to supply the painting teams and replenish them where necessary, as the crowds grew the painters increased their work rate and those bearing the flags on their faces increased in number. Screens around the ground showing the fans showed our work product more and more.

After two hours, the fans were almost all packed into their seats, and the concourses were empty again save for the stewards and the odd policeman. The face painters once again congregated for photos and anecdotes before handing in their security passes. The talk was all about this having been a trail-run for possible painting at all future England matches. The FA liaison seemed very pleased and gave a good talk about showing a fun and positive England Football image. 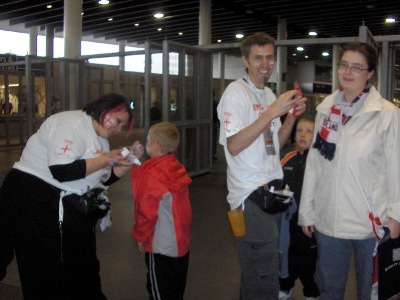 For the Official England Face Painters, the fat lady was singing and the work party dissolved into the drizzly North London night, to the backdrop of the huge stadium and the heaving masses – a good number of whom had their faces painted by the FPUK/Let’s Face It! horde. 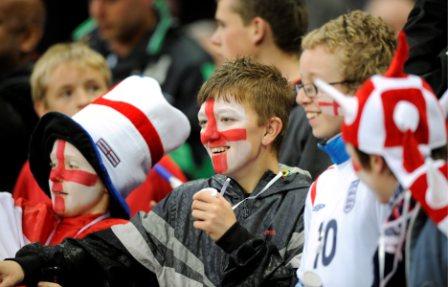 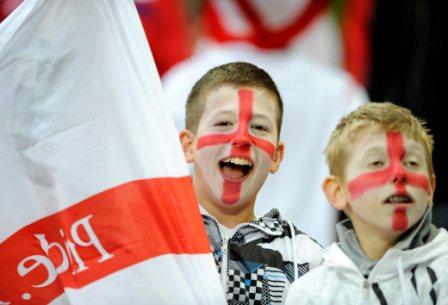 It was one of those days that you give thanks for being English, as the Cross of St. George is about as easy to paint as it gets. I’ve had a look at the flags of the world, and if we get a repeat booking against Albania, you can count me out of doing the away fans. 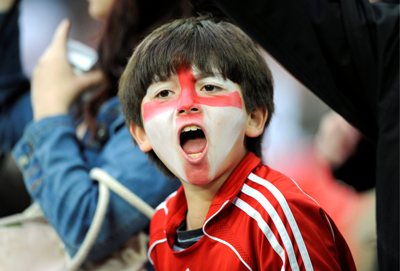 Thanks Gary, and if anyone has any more photos they want to send, please email them to us here

A huge thank you to all that turned up, took part and did a grand job. We all look forward to the next one! It's rumoured to be England v Czech Republic, same colours, and nice 'n' simple eh Gary?

If you would be interested in taking part email Bibi , you'll need to be able to send pictures of your facepainting skills.

See next post for 'how to paint an England Flag....