PEACE BY PIECE (STEP BY STEP) 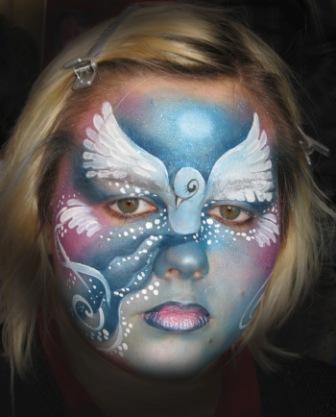 This was the face that won 'Best Design', 'Best Technical Ability' and 'Facepainter of the Year' at the Face Conference in Scotland in January! As the artist was Facepaint UK's very own Bibi Freeman, we are able to bring you a Step by Step breakdown of exactly how it was done. Over to you Bibi....

Thank you, thank you. I would also like to thank my friends, my family, everyone that's ever been nice to me, and not forgetting Sisina - my beautiful 'surrogate' daughter (never managed to have one myself) who sat patiently while I did this step by step for you! And to the model with allergies at the Face conference without whom I would never have entered! Read 'Peaceful story' at the end if you want to know more.

So, with no more ado, on with the show.

All the paints used are Grimas as we had done a patch test with the brand on the model who was fearful that she may be allergic! 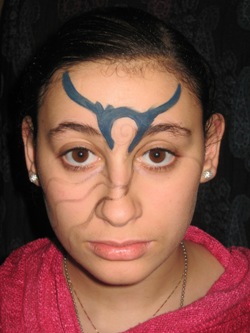 1. Lightly sketch the main shapes in watered down black. Paint the outline of the background in dark blue, I make my own from a mix of Grimas 301 and black as I use it so much. I used a Paradise medium round brush. 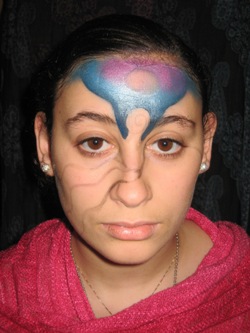 2. Blend away with pearlised blue 731 while the painted line is still wet. I don't call it drag blending as it's not a drag, and there's no dragging, just blending, otherwise you may get streaks. Blend again into pearlised pink 753 and remove a circle for the moon with a clean damp sponge pulled into a small ball shape. The sponges I use make this easy to do. 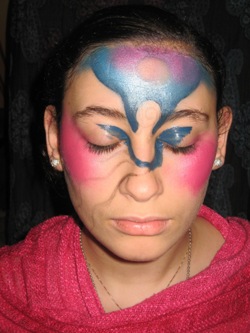 3. Add the 753 roughly in the area of blusher.
Paint the underside of the bird with dark blue.

4. Blend again with 731 while wet, making a soft line up over the eyes leaving a wing shape unpainted. This design depends upon the relationship between the shape of the eyes and the corresponding shape of the wings. 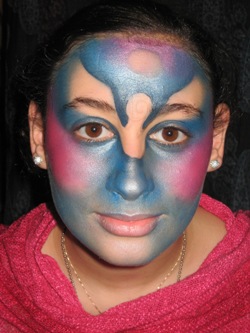 5. Using the same blue sponge, gently add the pearlised blue to the outside of the chin, blending upwards into the pink. I added pearlised white 704 to the front of the chin. 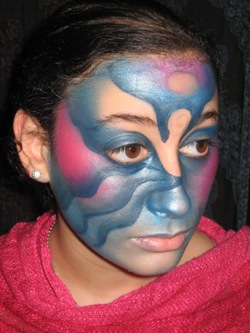 6. Starting from the bottom, paint the wavy lines from the lower body of the bird across the right cheek, blending each one upwards as you paint. 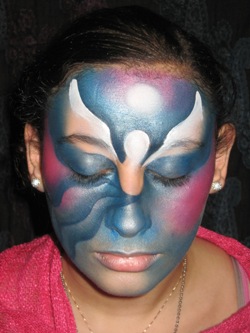 7. Again using a Paradise round brush (that is suitably "broken in" to have a roundish end) paint the top of the wings in one stroke, and the dove's head. Quickly sponge away to a soft edge with a clean sponge. Load the sponge with a little white and fill the moon space with gentle dabbing movements.

8. Add the feathers in quick, firm strokes that follow the same direction as the top stroke. Paint the underside of the dove's body and blend with a sponge into the head. (2 pictures) 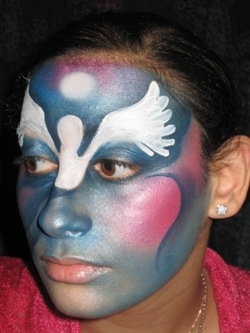 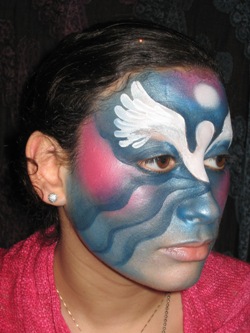 9. Add the white swirls, I used a Grimas S2 brush. 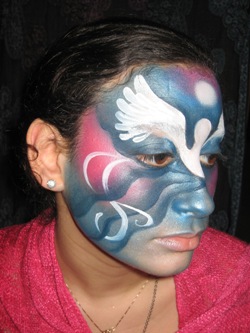 10. Add a dark blue line to the left side, blend away towards the ear and add a white line to follow the same curve. 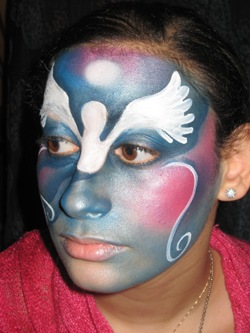 11. Add some stars and dots around the white lines 12. Paint in the spiral to define the dove's head and eye, and add little eyelashes. Finally add the little feathers under the eyes in white, outline the lips in dark blue, I filled in with pearlised pink and some silver cream.

13. Don't forget the beak. I did! After outlining in black, I filled in with Grimas silver cream. 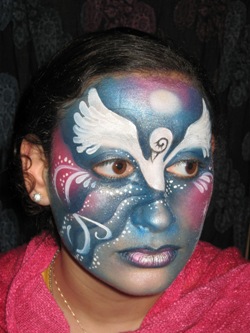 14. We tried photographs dressed in different colours, each have quite a different effect. 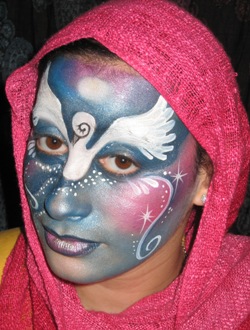 15. For this one I added some gold powder to the moon, and glitter. It's a lovely photo, but as I was using flash, it reflects a bit too much. 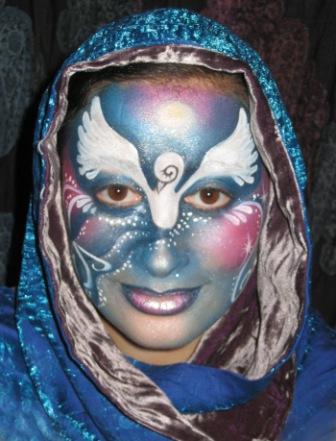 I had no intention of entering Face Painter of the Year! I did think I could contribute an idea for the theme to the box of suggestions on the table, so took a little slip to fill in later.

Later came, and I thought, oh my goodness, what shall I put? I had been having such a nice time at the conference, a pleasant surprise after previous difficulties with Face and its rules and competitive ideals, that when the word "peace" came into my head, I thought, that sounds about right. So I wrote it down and put it in the box without another thought. It seemed reasonable to me, this was my first tentative step back into a group that had seemed to reject me.

One of the models lined up for the competition wasn't sure if she could be painted due to allergies. I was the only one present in the room with a"one brand kit" to do a patch test, I was demonstrating for Grimas, and had it all! Was I being a bit dense not to realise that this would mean I might have to enter? Or was I being led by the nose? When it transpired that I was going to be competing, there was a little internal panic. I'm one of those that likes to be prepared, and doesn't like surprises, or competitions. No time to think about that, I thought, just let go and do what you can.

When my piece of paper was drawn from the box, you could have knocked me over with a feather. I had no idea what to do, and it was my idea! An image of a dove descended on me with a sense of calm. Part of me felt it was a bit obvious, but hey, an idea was forming whether I liked it or not, and there was just 5 minutes to get it together. I quickly sketched a rough positioning on my arm and we were away.

I couldn't believe how quickly it went, not the time, the painting! Because I had not considered competing, I just focussed on getting the elements onto a face, and finished with time to spare. I started adding details that may not have been needed, my addiction to dots has been noted by Caro, but they are ever so useful as a displacement tactic!

Later, I was fairly embarrassed to have won FPOTY so decisively, and sincerely thank everyone there who appreciated the joint effort - serendipity, inspiration from nowhere, Grimas paint and my right hand! I'm grateful that fellow painters made the decision, sharing is great, and this way we all get a good look in!

It certainly feels nice to be thus recognised (you wouldn't believe how self-critical I am) and I'm sure I can benefit from the accolade. Meanwhile, my children are dead proud of me, and that means more than I can say.

And to Face - PEACE at last?