This Rabbit was inspired by watching an old Bugs Bunny cartoon the other day. It can be interpreted many ways, with different colours, add cute eyelashes for a girl, but we'd never seen one quite like this that changes the shape of the face so effectively.

1. The face was painted with white cake (Grimas 001) first, this gives a good base for the pearlised grey (Grimas 710) that was going to be used later. The white is sponged roughly in the area I was going to be painting, and I sketched the eyes, cheeks and teeth lightly as it was a first for me too!

2. Outlining the head and eyes with Paradise black, I blended the pearlised grey in quickly while it was still wet, then did the same very lightly for the ears.

3. Grimas white (001) sponged quite lightly over the cheeks, centre of the eyes and on the top lip brings the elements 'forward' adding a little grey to the outside edge rounds it off. I strengthened the black lines around the teeth and mouth using a No.4 Harbin brush and blended this gently while it was still damp.

4. A mix of pink (Grimas 506) and brown (Grimas 1075) was painted 'inside' the ears, in the mouth (just a touch) (Grimas MR4 brush) and a little pink sponged on the cheeks gives an extra warmth. A pink heart shape on the nose is cute too, and big pupils painted in black give extra expression. These can be done with a circular outline, and again sponged gently when wet to give a smooth cartoon feel. A bottom 'lip' can be added, or not! I was looking at the cartoon, which had one, but it works without. White highlights with a Paradise petal tip brush on the ears, eyelids, teeth and a flick of hair makes this rabbit almost ready to hop!

5. Finishing touches, a few white fluffy strokes with a No.6 round brush at the edges, and whiskers and dots with a daVinci synthetic liner brush to keep the strokes light. You could add a bright orange carrot for lunch, but anyone would be a happy bunny even without one.


This design is one of those that works well with the eyes closed. This is pretty much the case for all cartoon characters. If you are interested in exploring cartoon and film characters, don't forget our workshop on 10th October, and the shape changing techniques used here will be exploited in the class a little bit sooner on 30th May. 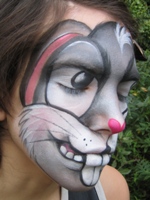 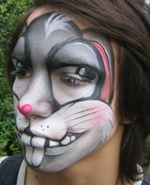