Following the Halloween Monster class at the London School of Face Painting Kat Sinclair decided to take her horrible new skills out and about. She lives to tell the tale...just! 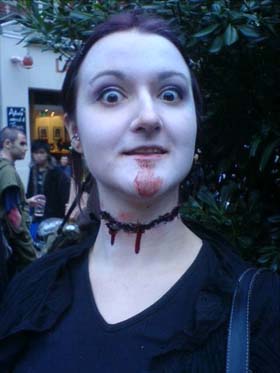 Saturday 28th October - just another shopping day for thousands of Londoners and tourists in Oxford Street. But behind the scenes the zombies are preparing to give the capital a right old scare!

I found out about this great bunch of people when I was trawling the internet looking for gothic designs to use at Halloween. I came across this great site called Meetup.com which provides the technology for thousands of groups of people with wildly different interests to arrange meetings anywhere in the world. You just sign up (for free) and join the groups you're interested in to receive emails about the next meeting near you. One group is the London Goth Meetup Group, full of groovy goth guys and girls, who I quickly found out are up for anything!

Once a year they have a "Crawl of the Dead" - loads of goths meet up at a pub just off Oxford Street, get made up as the most horrible decaying dead things and wander off through central London. When I turned up I was told "we've been waiting for you!" and led away to a creepy corner where several goths were applying special effects blood and gore to each other's faces and bodies.

I immediately set to work, plonking my kit down next to their mascot, Squeaky (a plastic Black Rat, very housetrained). First up was a very tall guy with long hair, whose arm I applied a huge cut to - adding loads of blood and gore, and a new product I had picked up at Charles Fox, some really nasty looking gooey pus for that extra rotten look. I also gave him a gory knee, using my spatula and wound filler to create the look of a totally destroyed kneecap. 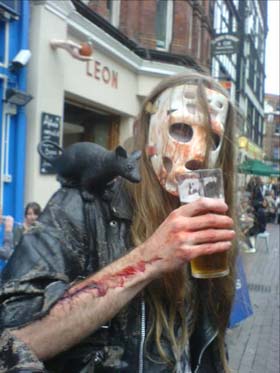 Next up was a good-looking blonde Lestat-type, "I just want to look dead, with a bit of mould please" - which is what he got, I gave him a white base with some shading for sunken cheeks and some brown and green paint around the edges for a mouldy look.

Next up was a lady who was on her way to another party - she had emailed me a couple of days previously to ask about painting her arm to go with a dress for the party, but I told her I was busy with these zombies - so she turned up on the day and I did her there and then, with the goths looking on! We were all pretty pleased with the results.

Then it was time to leave the pub and scare the public - first we went into a mall and up the escalators, alarming the security guards who followed us all the way round at a safe distance. One zombie tried to go up the down escalator, staggering towards the descending shoppers who tried to scramble back up! The main bulk of the zombies staggered around the food court, one enduring memory is of 30 of them with arms outstretched towards the helpless McD's staff who cowered back in terror, until one threw some tomato ketchup sachets at the zombies to sate their thirst for blood!

We then staggered off down Oxford Street, with bemused shoppers scattering out of our way as the cry of "Brains! Brains!" echoed through the mob, which lurched along quite quickly, only pausing to slobber on the occasional shop window.

Then down some steps to a side street and cut through to the top of Carnaby Street, where there was a Neil's Irish Pub. The zombies entered en-mass, and for some strange reason the people already in the bar left just as quickly.

We stayed there for about an hour, giving me time to do another special effect - a slashed throat on a tall dark haired goth girl. I quickly discovered that necks are not the easiest of places on which to apply wax, the skin being too soft to press the wax down hard enough to stick (I was using Mehron) but after some kneading to make the wax softer it eventually did what I wanted and the other zombies were suitably impressed with the result. I also poured some blood in her mouth to let it spill down her chin - the blood was from Fox again, and tasted like syrup as it is sugar based with food colouring (for connoisseurs a mint flavour is also available from Ben Nye).

Then it was off down Carnaby Street, mobbing all the shop windows on the way... "Brains! No, shoes! Brains! No, coffee! Brains! No, McD's again, although you never know..." 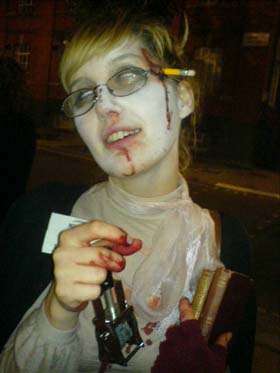 Then another pub, and this time I was collared by the Librarian of Death - with her own books, hand stamp and pencils in her hair. I took one of the pencils and broke it off near the rubber end, and stuck it into some wax which I then applied to the side of her head with some more gore and blood running down from the wound - again, the wax wasn't sticking very well, but as she was wearing glasses this helped it to stay put.

We were then thrown out of the pub as some members of our merry band appeared to be under 18 according to the barmaid, so we lurched off into Soho, where nobody batted an eyelid as we staggered through Old Compton Street past the drinkers outside the many bars lining the road.

We then got onto the Tube at Leicester Square, the zombies frightening a couple of schoolgirls on the escalators. One zombie right in front of me turned to scare people going up the escalator and knocked me over, bits of kit tumbling down the stairs and causing a massive bruise on my arm (and one on my rear which I discovered later and can still be seen!).

The zombies packed onto a tube carriage, recreating the Shawn of the Dead poster as the doors shut. The tube journey up to Camden allowed me time to refresh some zombies who were the worse for wear, their make-up running slightly due the effort of lurching through the city streets.

When we got to Camden we went in a pub called the World's End, where the regulars wear outlandish costume every single day and some of us looked really underdressed! I spotted a Jack Sparrow, a couple in Edwardian costumes and a guy wearing a doublet, hose and a ruff - all just regular customers!

As the zombie mob staggered off to their last port of call - the Devonshire Arms - I decided to call it a night and went home with my sore feet, to a dinner of fish n chips and wash off the blood.

You can see more of Kat's work in the updated directory.
Kat has also instigated a Monthly Meetup for facepainters in London - see you there?